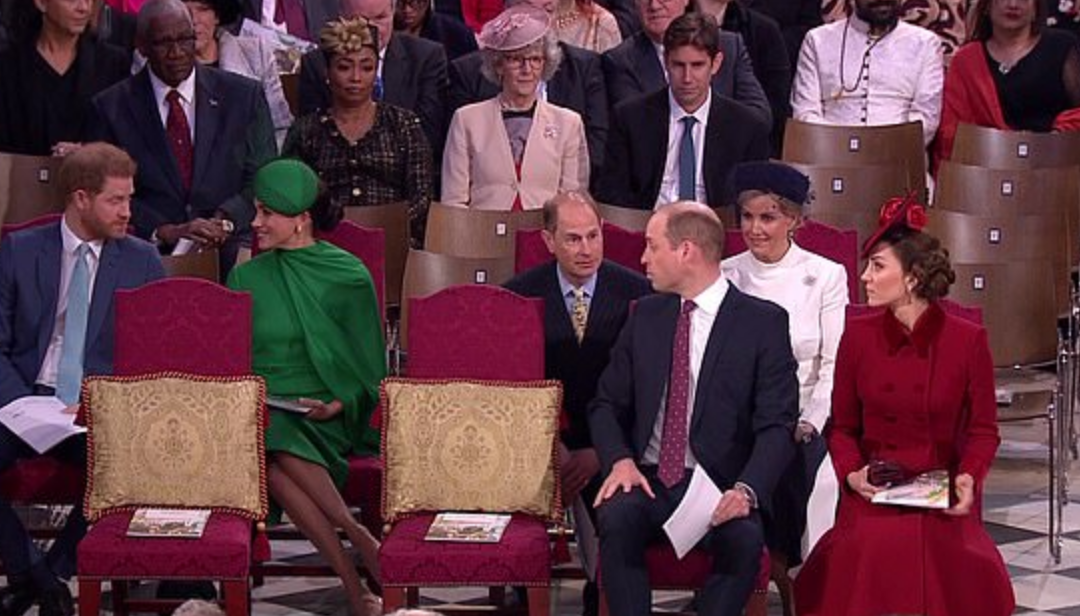 FEMAIL asks body language expert to examine how Duchesses’ public exchanges have changed since first public outing together in December 2017.

Adrianne Carter says that while Kate appeared ‘rigid’ yesterday, Meghan seemed relaxed, as if ‘a weight has been lifted’

A little over two years ago, the Duchess of Cambridge and the Duchess of Sussex made their first public appearance together at Sandringham on Christmas Day, prompting hopes they would form a close friendship as sisters-in-law.

The pair appeared relaxed in each others’ company as they joined Princes William and Harry, a warmth that continued into their first joint engagement at the Royal Foundation Forum in London, under its slogan ‘making a difference together’.

But fast forward two years, and Kate and Meghan, both 38, were photographed offering a cursory, terse hello in Westminster Abbey for the annual Commonwealth Service yesterday; an exchange that was at best polite and at worst, downright awkward.

The minimal interaction was a million miles away from how the two women had appeared on their more laid-back public outings pre-Megxit – including two trips to Wimbledon and one, with their respective broods, at the polo in Berkshire last summer.

Femail has asked leading body language expert, Adrianne Carter, to examine how the Duchess of Cambridge and the Duchess of Sussex’ relationship has seemingly deteriorated – going from friendly to frosty – since Prince Harry first announced his love for Meghan in September 2017. ORIGINAL ARTICLE HERE. 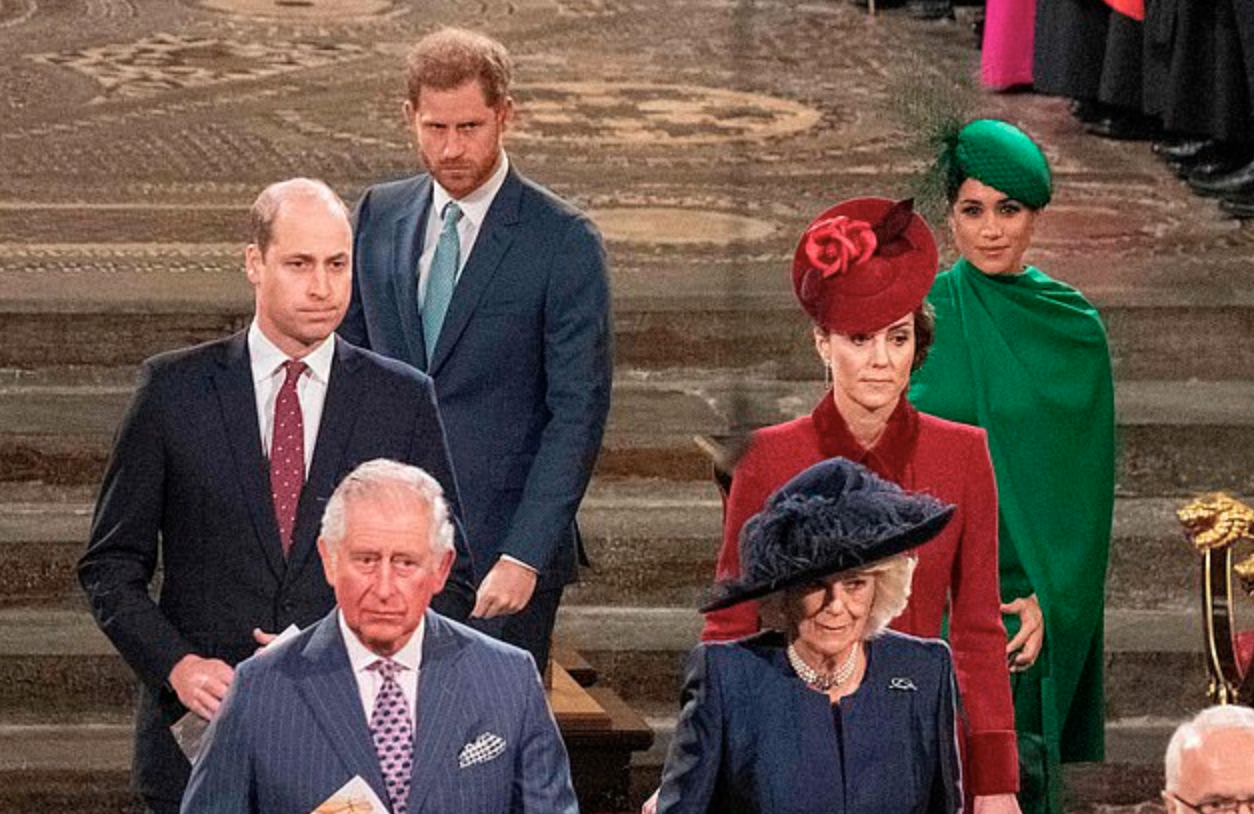 Meghan’s arrival into the royal family was officially marked on the short walk to St Mary Magdalene Church in Sandringham, Norfolk on Christmas Day 2017.

Beaming alongside her prospective sister and brother-in-law, Meghan – and indeed William, Kate and Harry, appear delighted at their new friendship.

Says Adrianne Carter of the now-famous images: ‘This photo shows two couples happy to be in each other’s company. There’s not much distance between Kate and Meghan, showing no signs of tension or disharmony at this stage.’

Even their walk suggested they were in tune, she adds: ‘They literally look in step as a foursome. When we feel uncomfortable we will often put distance between ourselves and the object(s) of unease – no sign of that with Kate and Meghan, who are very close in distance too here.’ 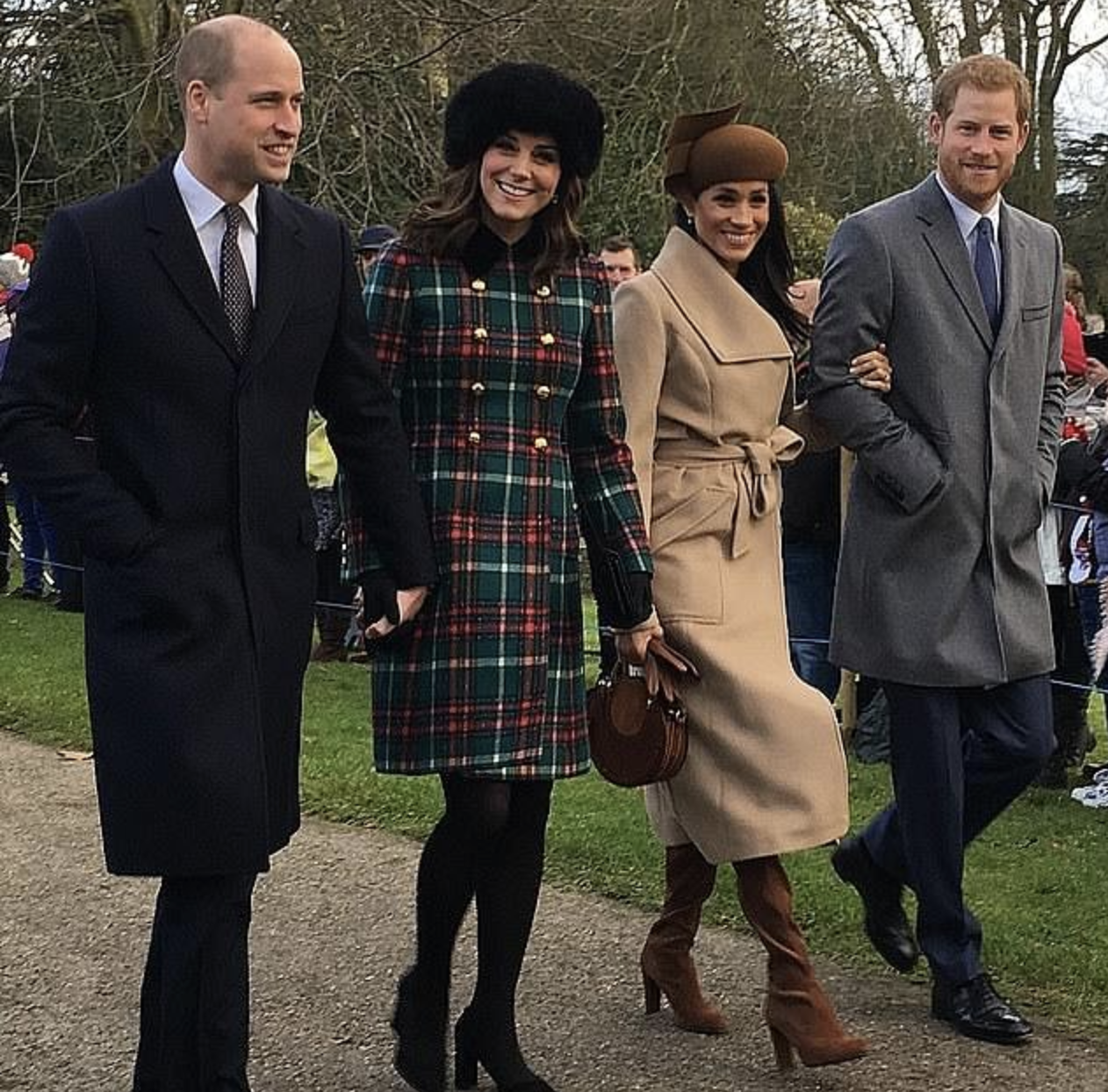 FEBRUARY 2018: RELAXED AND BECOMING A ‘TEAM’

By February the following year, Meghan is clearly enjoying her induction to the Firm, as she and Prince Harry attend the first Royal Foundation Forum with Kate and William.

The images of a blossoming Kate and a relaxed Meghan show all is still rosy in the royal garden at this point.

Carter says of their body language in the photos: ‘Both Kate and Meghan are still showing relaxed body language. Kate also looks like she is happy with Meghan taking the limelight at this stage. Both are showing genuine smiles in this set of images.’ 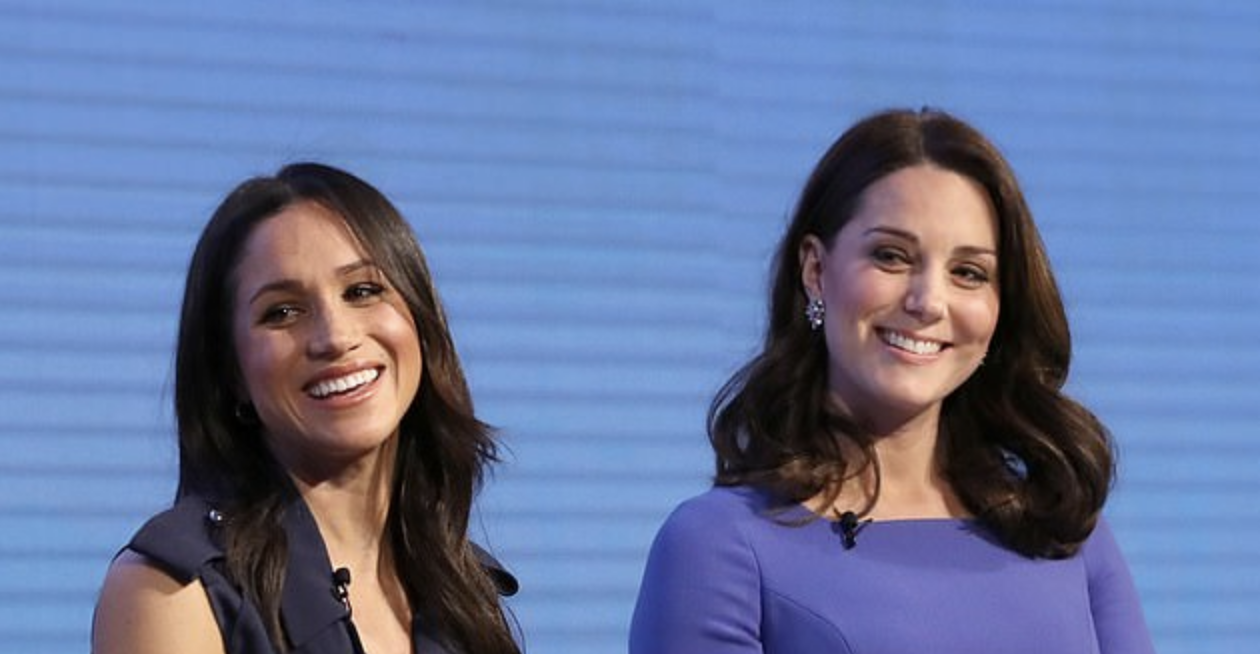 Carter says that Kate looks like she is happy with Meghan taking the limelight at this stage in the new friendship, with all of the smiles on stage ‘genuine’

Shortly after Meghan and Harry walk down the aisle after the world has watched them wed on May 21st 2018, the senior royals gather for a family photo – but it’s clear the dynamics are starting to change already, suggests Walker.

‘Even though this is a wedding, and a happy occasion, Kate’s smile here is forced.

‘She is also physically leaning away from Meghan with her arms wrapped around Charlotte protectively.

‘Kate’s body language is saying that she is there because she has to be there and not because she wants to be. This photo hides a multitude of emotion.’ 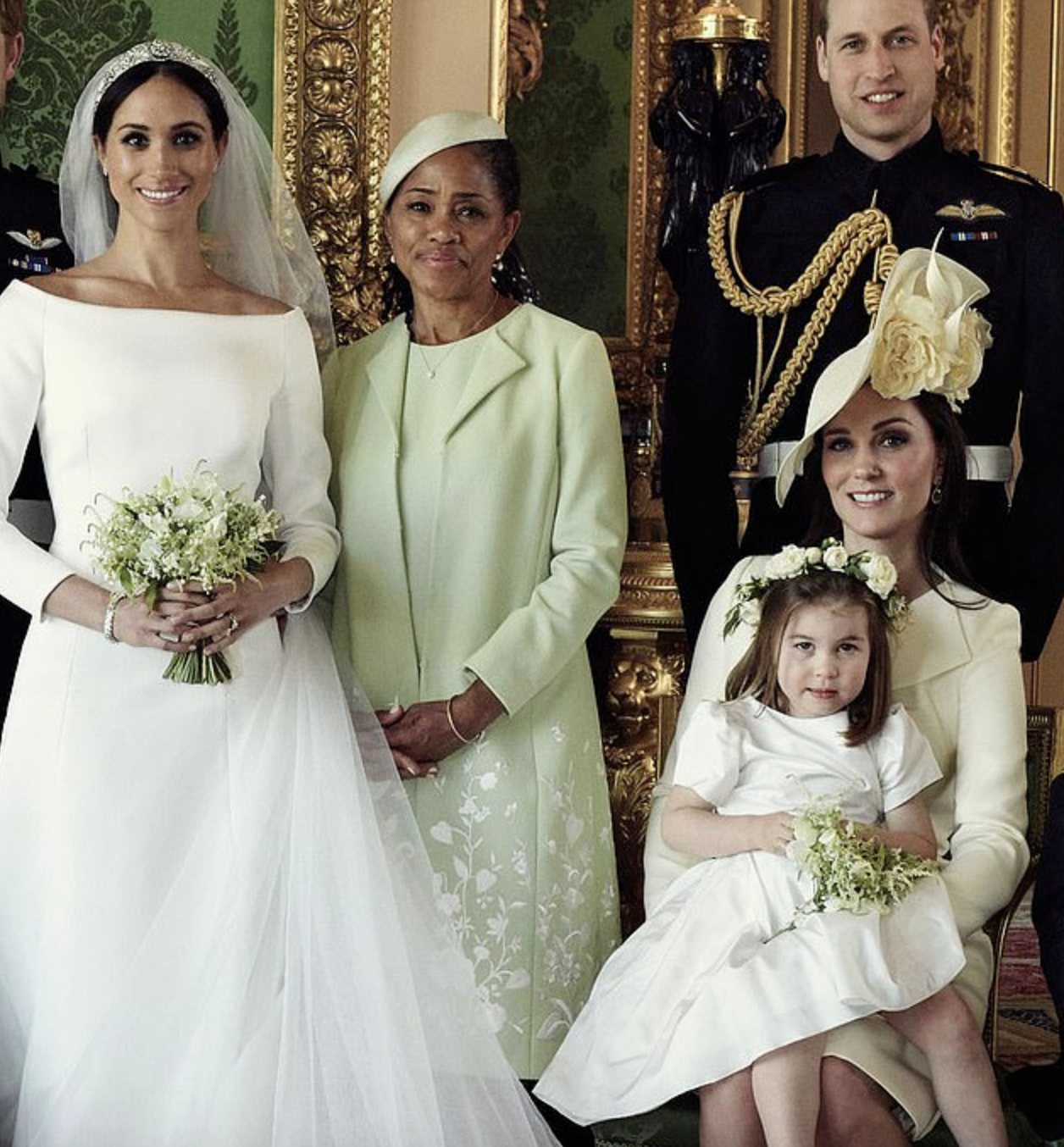 It’s clear that things aren’t quite as relaxed as they once were, says Carter, of the images of Kate and Meghan pictured at Trooping the Colour in June 2018.

She explains: ‘We see Kate holding herself very rigid in this image. We hold ourselves rigid when we are trying to contain any emotional leakages. She is conscious of not revealing how she really feels in this image.’

And Meghan’s day-job is coming to the fore here, Carter adds, saying: ‘I think we see Meghan the actress, showing a posed, coy smile. She is portraying the image she wants to be captured…’ 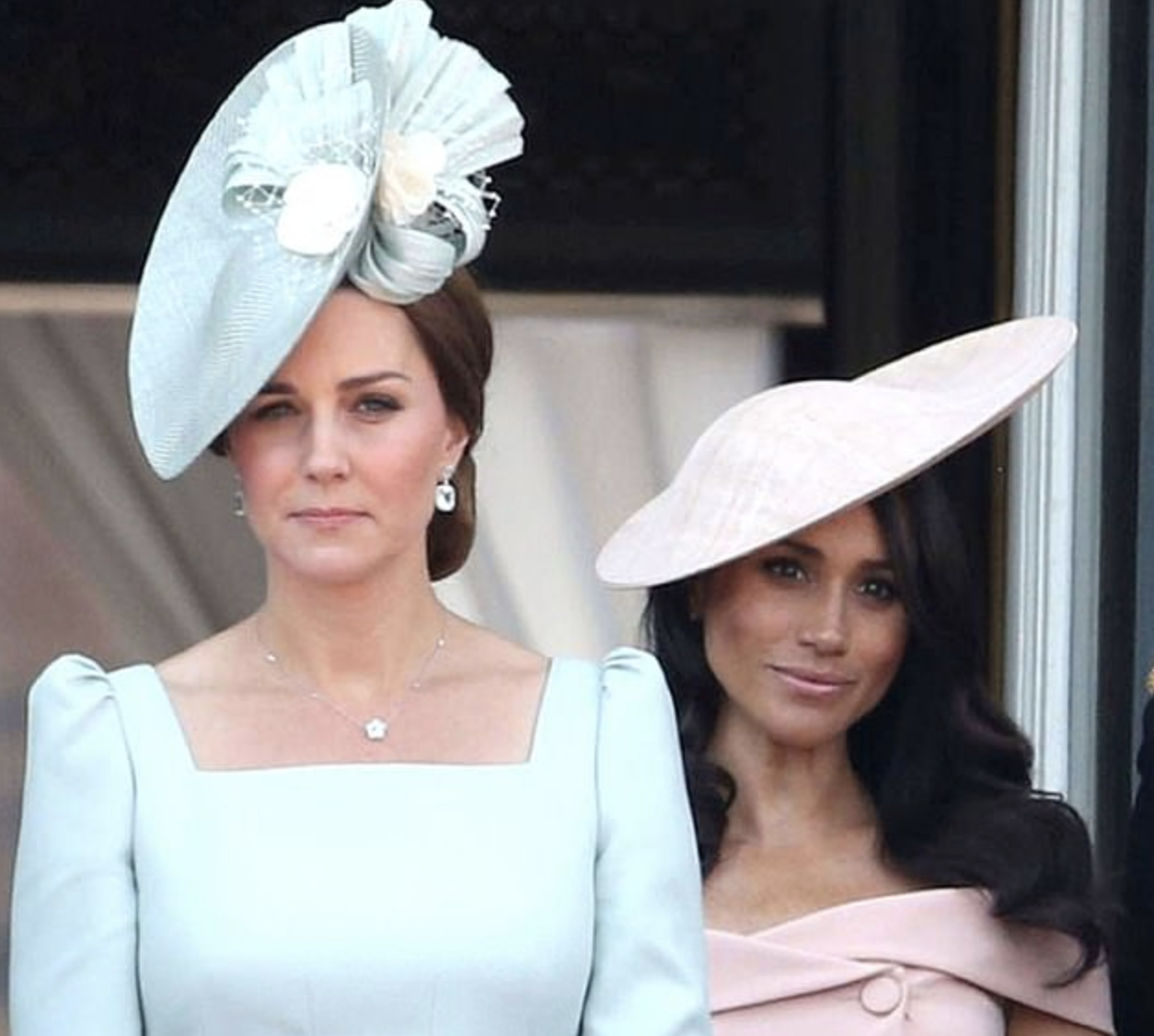 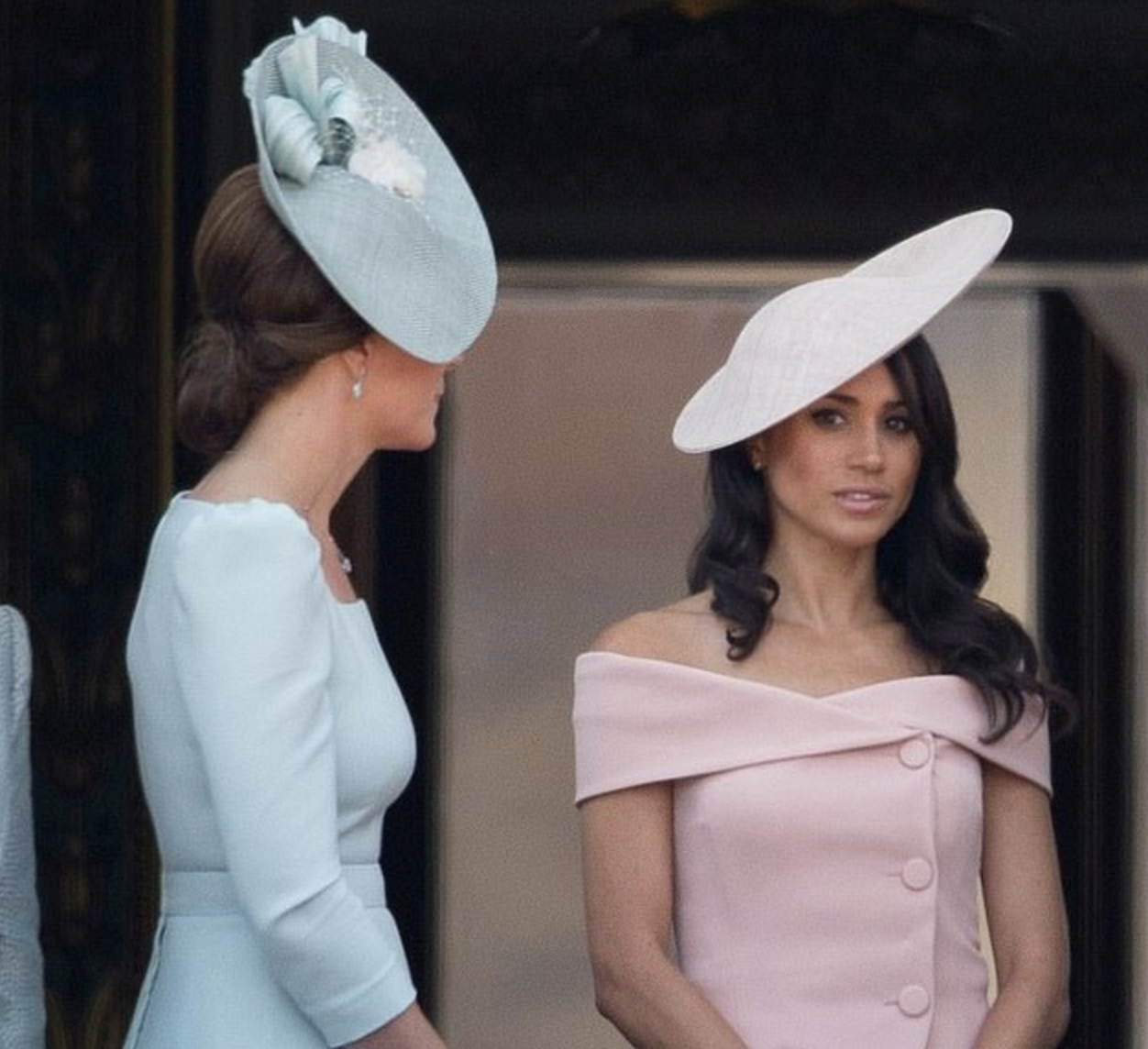 Kate’s body language here is rigid, suggesting there’s obvious tension between the two women. Says Carter: ‘She is conscious of not revealing how she really feels in this image.’ 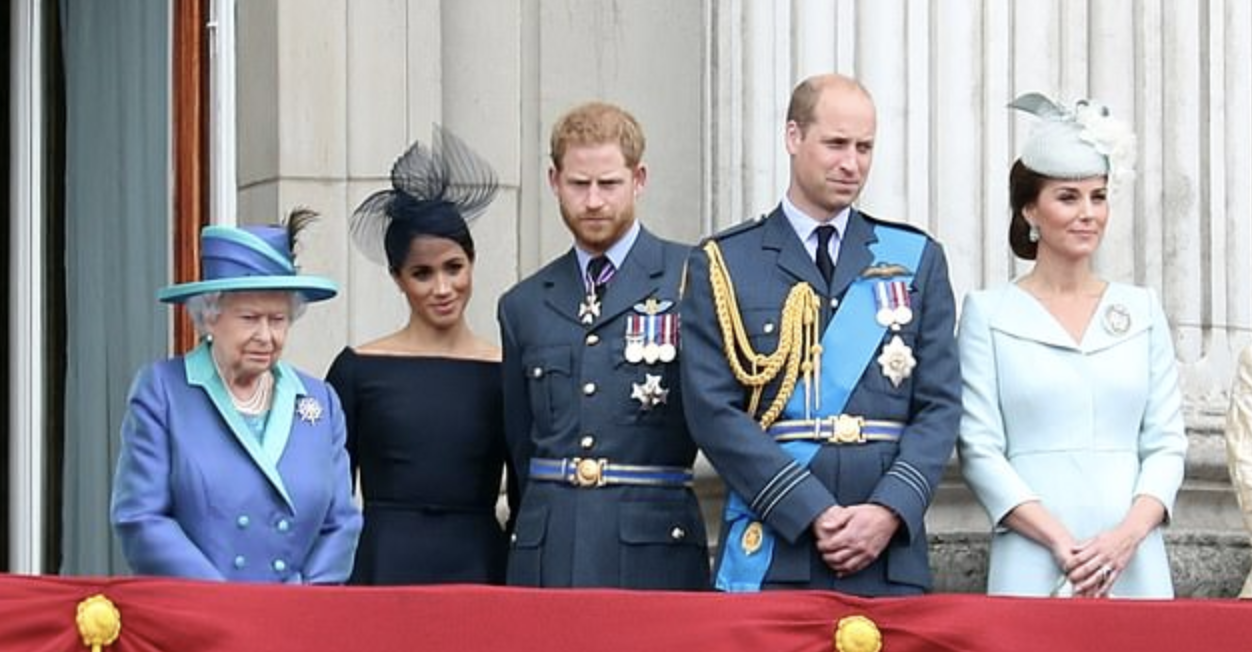 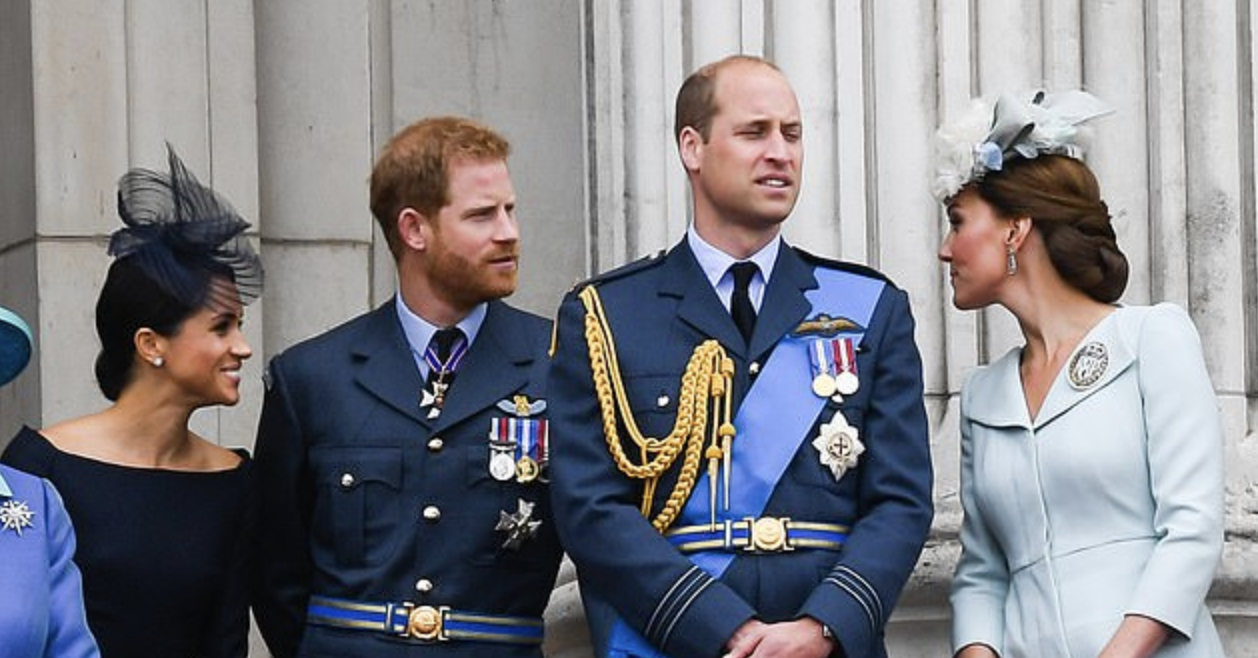 By Christmas 2018, the rumour-mill is working overdrive as it’s reported that the initial friendship between the two Duchesses has rapidly cooled.

While the four royals still sit next to each other at Princess Eugenie’s wedding to Jack Brooksbank in October 2018, the warmth appears to have evaporated, say our body language experts.

And as the annual stride up to church on Christmas Day 2018 arrives, so does the united front.

Comparing the previous year’s photo, Carter says that clearly much has changed in their dynamic in the year that’s passed.

‘Kate and Meghan are having a good go at portraying a friendly image although if you notice the spatial distance between them is not as close as the year before.

‘The distance is showing us they are clearly not as close as they were. Both men look like they would rather be anywhere else but here.’ 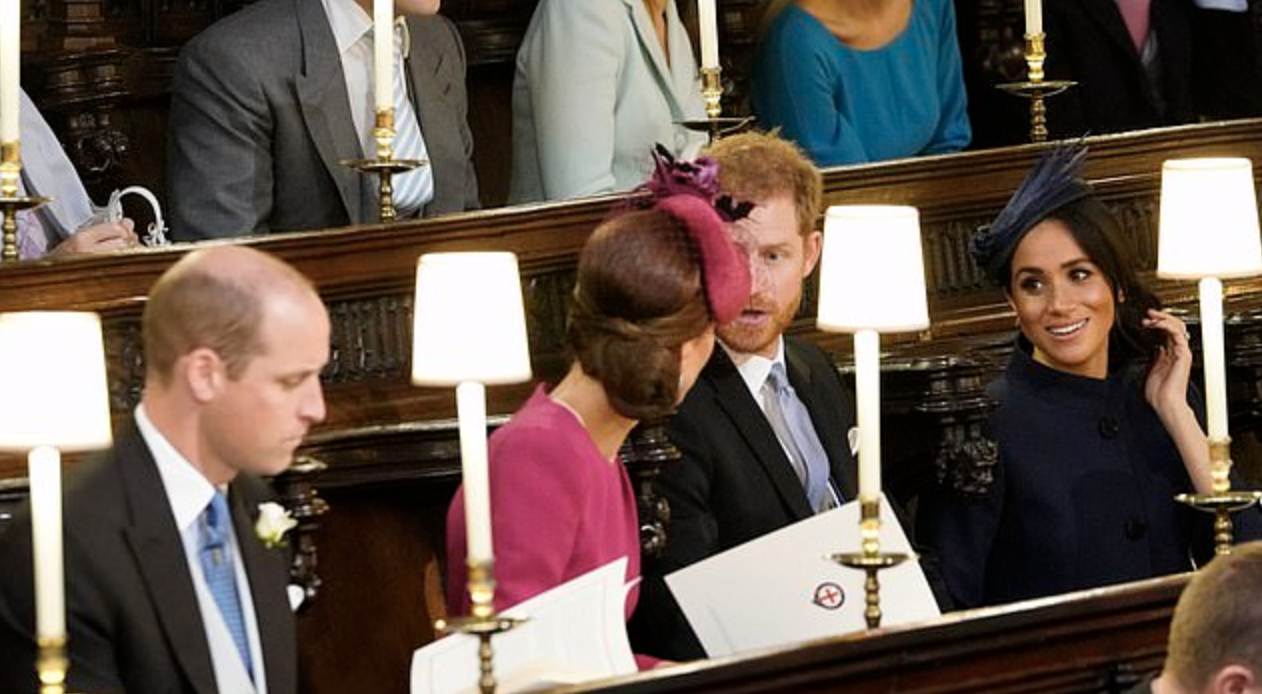 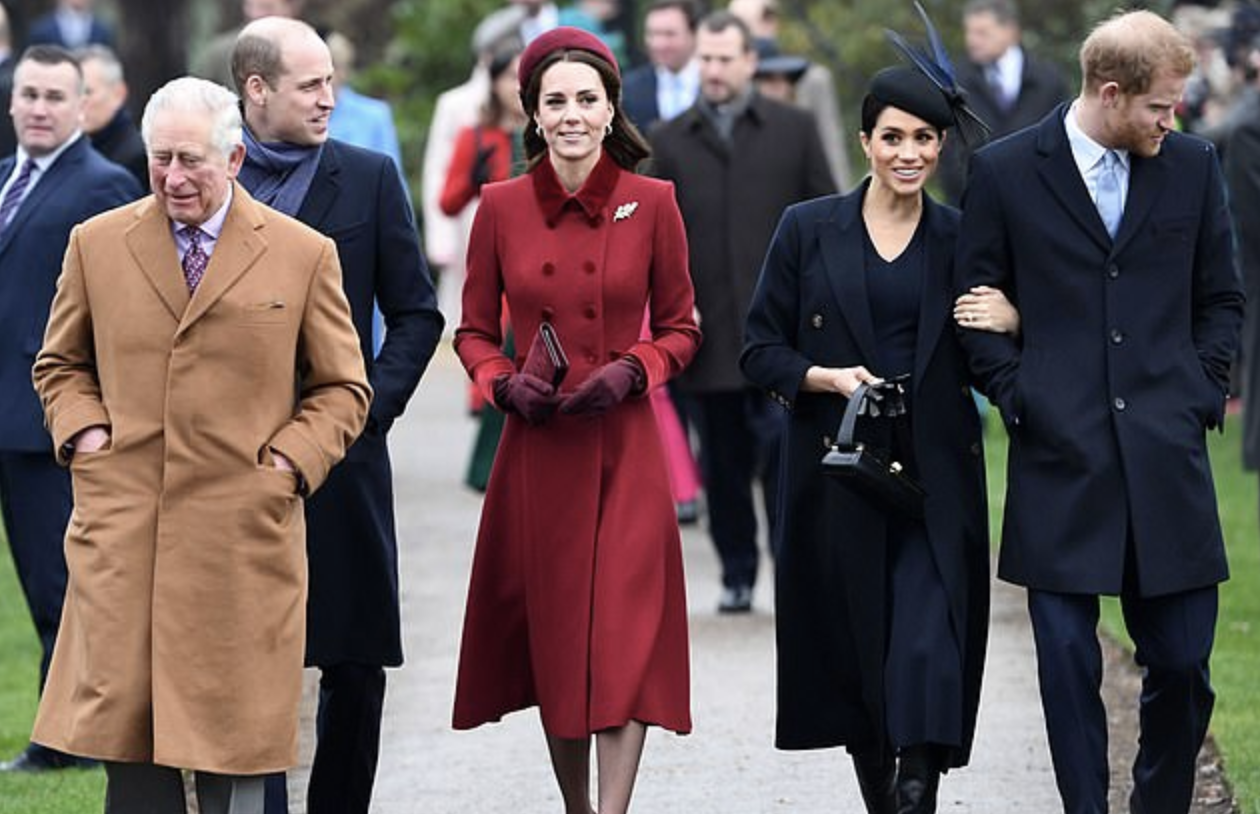 Crucial point in their relationship: This set of images tells a thousand words, says body language expert Adrianne Carter. She explains: ‘Kate and Meghan are having a good go at portraying a friendly image although if you notice the spatial distance between them is not as close as the year before’

Monday’s photographs of the royals at Commonwealth Day service at Westminster Abbey offer a stark contrast in how far perhaps the royals’ relationship has drifted.

While cracks may have been beginning to show at the same event in March 2019, the brothers and their wives were at least stood next to each.

Carter says these images suggest that distance was already on the cards. She says: ‘Kate is holding herself very separate from the rest of the group and appears very rigid. Her face is in a neutral-set expression. Again, it looks like she is trying to contain her true feelings and she is very conscious of the spotlight.

‘However, Meghan is leaning in as if to show she is interested and part of the group but It’s a social smile rather than a genuine smile of enjoyment.’ 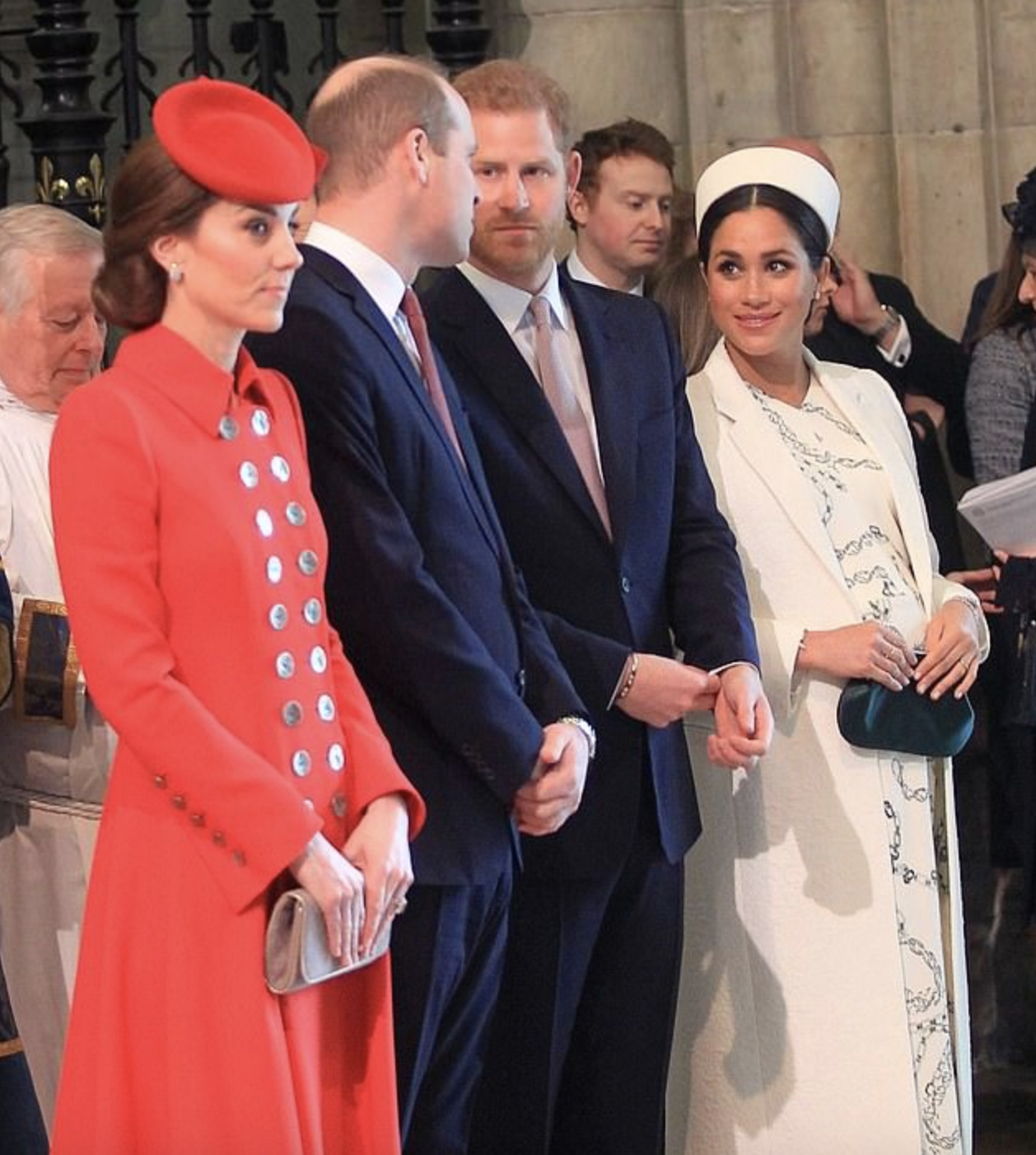 JULY 2019: TRYING TO BUILD BRIDGES VIA TENNIS AND NEW-BORN ARCHIE

If cracks are beginning to show, then a shared love of tennis, and a brand new baby in the family – Meghan and Harry’s newborn Archie – offer a salve on the relationship by the middle of 2019.

Appearing together for the second consecutive year at Wimbledon, Meghan and Kate appear to get on well, says Carter.

‘This seems to be a genuinely friendly encounter between Kate and Meghan. The photo showing Kate leaning forward is something we do when we like something (or someone). 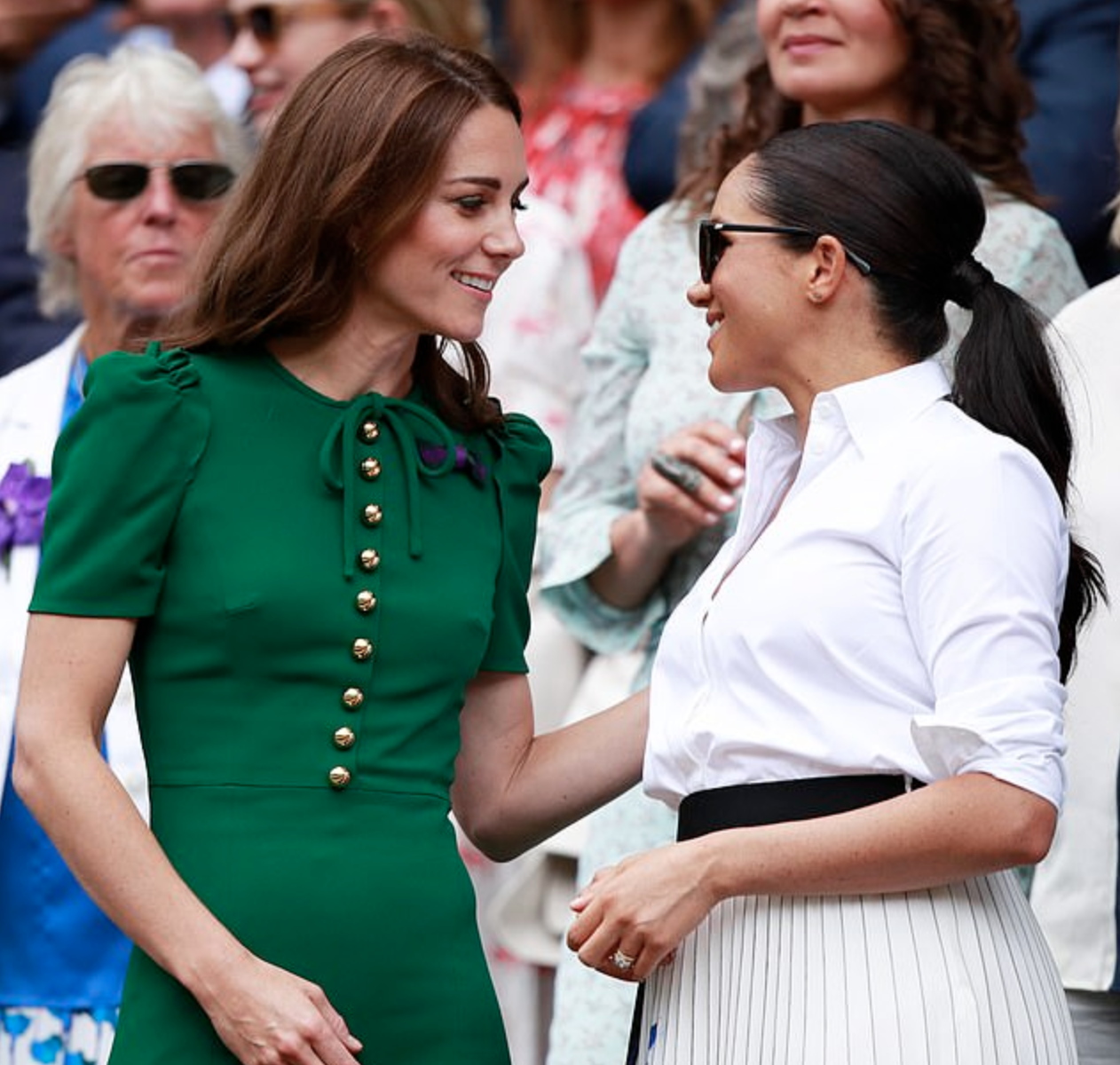 By July 2019, the body language is once more friendly, with a shared love of tennis bringing the women back together. ‘Kate is tactile, suggesting she feels comfortable to lean forward and to touch. We can do this when we want the other person to feel included and listened to,’ says Carter

She adds: ‘Kate is tactile, suggesting she feels comfortable to lean forward and to touch. We can do this when we want the other person to feel included and listened to.

‘Meghan is showing a relaxed posture and genuine smile but again has the sunglasses on – is the sun really bright or does she want that barrier to hide her eyes?’

A few days earlier, Meghan and Kate take their broods – including newborn Archie to the King Power Royal Charity Polo Day at the Billingbear Polo Club in Berkshire. While Kate and Meghan are physically close, they are moons apart, says Walker.

‘Kate may as well be in a different venue to Meghan, the photo shows distance between them.

‘Normally when friends are together with babies/small children, there is a real affinity and bond – and that is nowhere to be seen here. 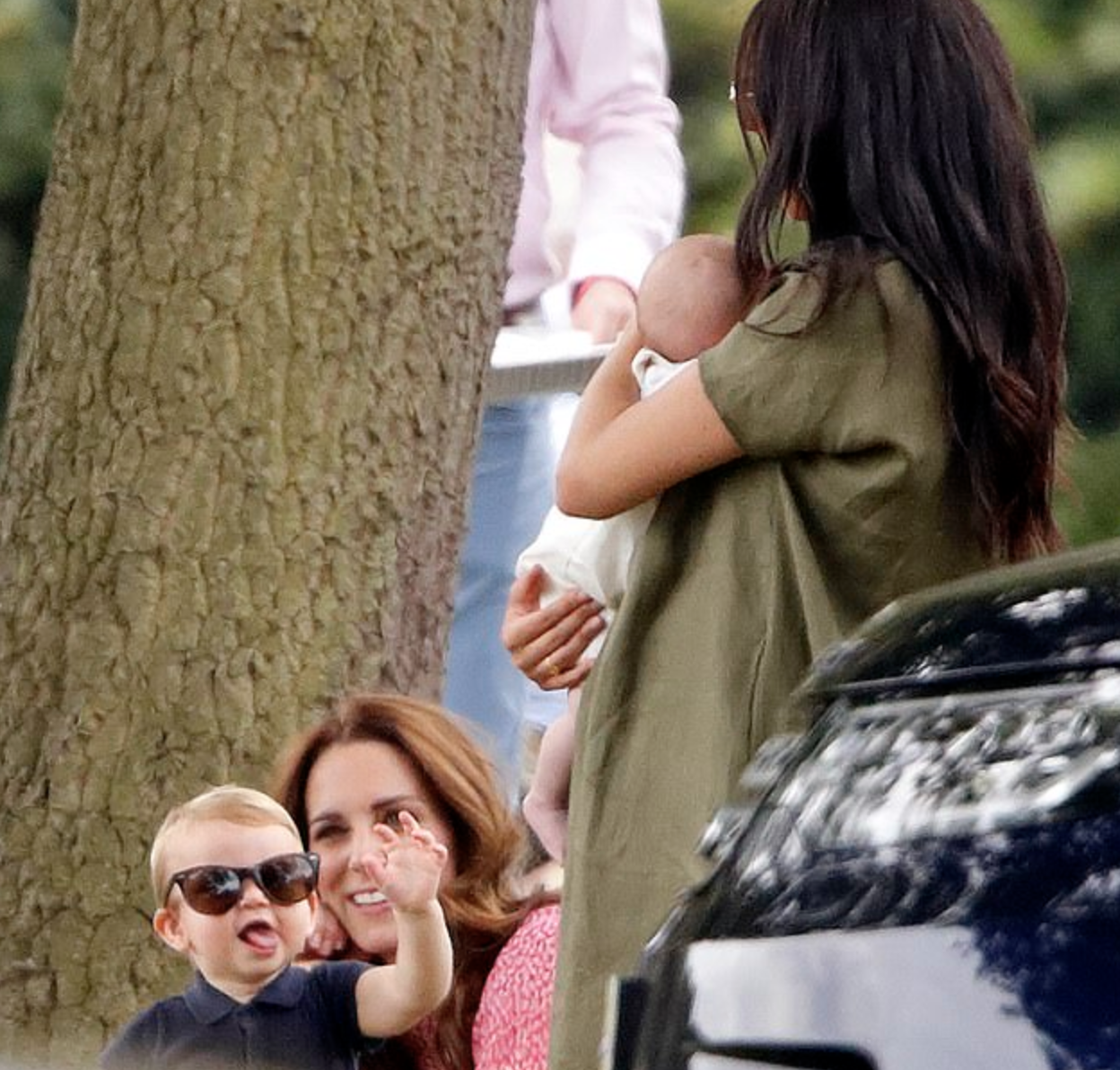 ‘Kate has physically turned her back on Meghan and has crouched down to attend to Louis, so she is blocking Meghan with her body, avoiding eye contact and staying away by bending down.

‘The warmth is no longer there, and if Meghan is struggling with her role or new baby, there is no visible support form Kate.

‘On a relaxed summer’s afternoon we see two mums enjoying time with their children. However, they don’t look particularly close apart from they are in the same space.

‘Meghan is wearing sunglasses which people sometimes do when they want to hide how they really feel and want some barrier to feel more comfortable.

‘We reduce intimacy levels when we wear sunglasses, particularly when the other person isn’t wearing them.’

The Sussexes’ final farewell to public life for the royal family was apparently marred by behind-the-scenes tensions over protocol.

The couple were reportedly told to make their own way to their seats at the front of the abbey before the arrival of other senior royals, alongside the Earl and the Countess of Wessex.

When Kate and William arrived, seated a row in front, there was a palpable atmosphere as they exchanged a polite greeting with Meghan and Harry.

Carter concludes: ‘Kate is holding herself very formally in this photo – she is clearly conscious of the world’s spotlight on her I suspect and doesn’t want to reveal anything about how she really feels – good or bad – that can be interpreted.

She adds: ‘When we hold ourselves so rigidly it can be a sign of tension but I suspect it’s because she is so conscious of the spotlight.

‘Meghan is showing a very relaxed body language posture, almost like the weight of portraying anything other than who she is has gone. Her face is in a gentle genuine smile – she has what she wants and is comfortable.’